Skip to primary content
Skip to secondary content
I know I just wrote a post days ago about how well following my hunger was going, but now I need to come here and be real with you.
I’ve been down on myself since my surgery last week because it meant having to stop exercising and then having to limit my exercise for a period of time.
I have been very hungry, and I have eaten…and not always the most nutritious foods. I got hooked on the scale a bit again, watched it jump up overnight, and panicked.
I jumped back into the gym before my doctor wanted me to, I pushed too hard, and I insulted myself internally when my body failed to perform.
I have felt out of control. I started fretting about calories again. I looked in the mirror over and over and over trying to see if I was bigger.
I am full of anxiety, panic, fear. Fear that I’m gaining fat. Fear that I am out of control and cannot regain it. Fear that I am no longer good at being hungry and not eating.
I do not want to live this way. This isn’t a way to live. And, I am so angry.
I’m angry that I can’t control my thoughts and fears. I’m angry that this…THIS…is what’s taking up all of my energy and brain space.
Fuck. This. 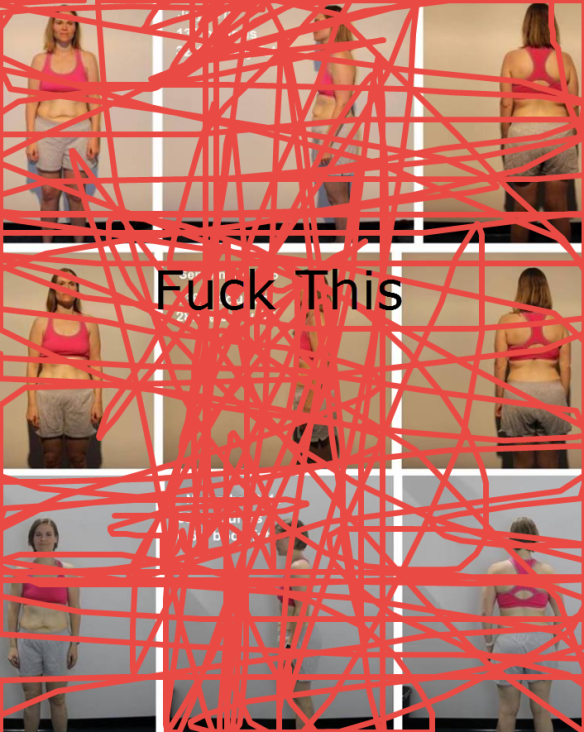 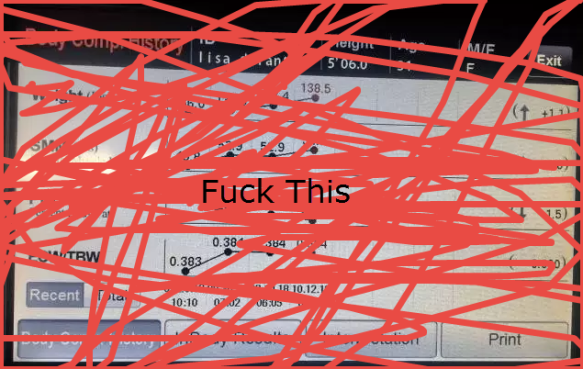 Do you know what happens when you die?
You leave your body behind.
Your thin body, your fat body, your firm body, your squishy body… it doesn’t matter how thin, fat, or muscular it is — your body stays behind, and it’s buried in the ground. And the body you leave behind is no comfort to those who love you, because it becomes vividly clear at the moment of death that you are not your body.
I have had the honor at being at both of my grandmothers’ passings, and I can tell you that there is a very distinct moment when a person becomes a body.
I know that is morbid — maybe too morbid for this medium. Well, I’m not sorry.
We (myself included) spend so much time, energy, effort, and money on the one part of ourselves that we ultimately leave behind. I’m not saying to completely ignore it; I’m just saying that what it looks like really does. not. matter. It just doesn’t. And I, personally, have invested a lifetime’s worth of anxiety into that bit.
So, here’s the deal.
I’m going to let myself get fat.
I’m going to keep eating when I am hungry.
I am going to keep having dessert and peppermint mochas and kettle-cooked potato chips with my white-bread sandwiches.
I’m going to keep lifting weights and running, because I love how it makes me feel. I am going to pursue a half marathon, a marathon, and who knows what else, because it excites me. But, I am also going to rest more when my body needs it.
And, I am going to let my body get fat if that is what doing all of this makes happen.
And, if you look at my fatter body and feel a little bit of smug pride in yourself for being thinner, then good! I am glad that I could in any way contribute to you feeling good about yourself for even a moment.
If you think I’ve gotten lazy, am making poor choices, am giving up, weak, or ruining something, then why are you still here? It sounds like we wouldn’t make great friends. I’m ok with that.
I don’t need you to approve of my body. I don’t always approve of it either, and I still get through the day.

At the beginning of November, I made a commitment to stop tracking my macros for the entire month. I wanted to see what exactly would happen if I, someone who has previously been obese but lost a lot of weight via tracking, stopped tracking those macros. It is now December, so it is time to report on those results. To really capture the breadth of the results, I’m going to break this down into a few categories.

To be completely honest, it took me a couple of weeks to really fully let go. For the first couple of weeks, I wasn’t using MyFitnessPal or weighing/measuring my food, but I was still “tracking in my head” using “guesstimates.” The first phase was highly stressful; I was hungry and wanting to eat more food, but I was so scared to do so.

Somewhere around the midpoint, my nutritionist challenged me to really let go and just eat to my hunger and see what would happen. I realized that the only way I’m going to really know if this works for me is to force myself to “just do it” even while my fear and anxiety kicked and screamed in my head.

So, I began specifically challenging myself: I bought foods for which I could not guesstimate nutrition information; I swapped my low-calorie bread for regular bread; I drank a little eggnog…and even a little alcohol; I had snacks that went over my previously assumed “safe calorie limit.” The more that I did these things and seen nothing terrible happen, the easier it got.

Thanksgiving was great – I trusted my hunger even on that day, which meant eating breakfast, lunch, and dinner plus snacks and not just hoarding calories for some big huge meal. I still struggled emotionally over the leftovers and had lots of reflection over how I used to binge and be stuffed for weeks on Thanksgiving leftovers in the past. The thing is, I now cook turkey and potatoes, etc. all year long, so there is really no desire to gorge on these things. I can and do have them whenever I want them. In fact, on Thanksgiving itself, I wound up mostly eating shrimp cocktail and veggies with dip because it was what I wanted more than turkey, which I eat all the time.

Then…last week, I had to have minor surgery, which meant I had to take a break from exercise.

First, I had to fast for the surgery, which was hugely difficult for me after all of this unrestricted eating. Second, I had to eat without exercising, which just was really scary. Thank god I had a meeting with my nutritionist a couple of days after surgery so she could help me screw my head back on straight. I realized that eating to my hunger has to mean eating to my hunger no matter what other circumstances are going on. And…that the only way I can know if I can trust my body AND my hunger is to listen to it even when my routines have to change.

Damn that ED and its ability to create new rules with literally anything! Breaking routines — ALL routines — and working on my flexibility is an area I still need to work on.

The good news is – I did it. I ate even when not exercising. I ate carbs, cheese, ice cream, peanut butter… Aside from one or two instances, I did not hold back and force myself to be hungry. I did wimp out and avoid eating out, I admit, but I will get there.

Obviously, the mental aspect of all of this is the area that needs the most work.

I cannot tell you how many times I have avoided, dreaded, or cancelled social gatherings/outings because of food and calories. The absolute best part of letting go of tracking is being able to let go of this need to “reserve calories” for social situations.

Probably the best thing that’s starting to come back is my desire and ability to go out to eat with coworkers. My entire team went out to eat at a local restaurant I’d been dying to try, and I thoroughly enjoyed having some appetizers, a main dish, AND a dessert. It was a really great outing — something I really miss doing.

Another event I got to attend and may previously have avoided because of the ED is taking my daughter to a breakfast with Santa! Yes, they had donuts and fast food as the only options. But did I die? Nope. And, we had a great time! 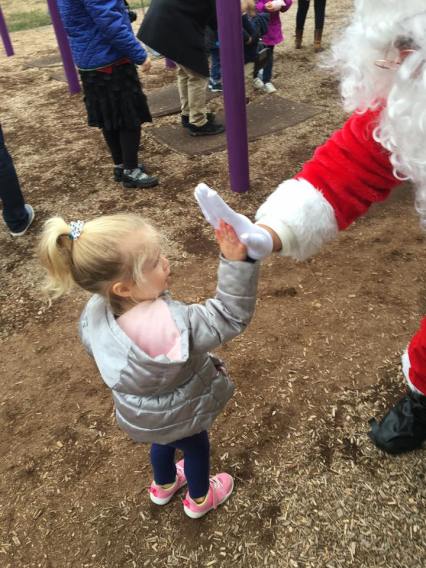 Ultimately, my weight actually went down a tiny bit and then remained steady for the entire month of November. Honestly, scale-wise, if I really look at it – I am exactly the same weight I was months and months ago…before ever starting exercising. I don’t look exactly the same, because my body composition has changed, but a standard scale reads the same number.

My performance did increase some! I finally broke 30 minutes on my 5k and joked that it was the Thanksgiving stuffing having finally made it to my glycogen stores 😉 Overall, I have felt better, stronger, more energized, and even warmer (I am usually freezing all the time, but my cold tolerance is much better than it’s ever been).

Ultimate Takeaways and Next Steps

Something that this has all definitely shown me is that I have wasted SO much time agonizing over tiny food decisions when my body can clearly handle so much more than I thought. I used to beat myself up so hard over an extra piece of bread or a few extra bites of ice cream, because that is what Weight Watchers taught me was the “slippery slope” that had made me obese to begin with.

But, I realize now that I wasn’t listening to my hunger any better when I was obese than I am/was when I was too thin. I’m also realizing that maybe I really can trust my body to tell me what it needs. That hunger isn’t something to fight against or embrace or fear: hunger is my body telling me it needs food, and it is OK to listen to that. My body and my hunger know a little something about what they are doing. Also, apparently my body can handle (or maybe even needs) a whole lot more food than I thought… so, there’s that.

So, it is now December, and I am still not tracking and have no intention of returning to doing so. For December, I plan to fully embrace following my hunger to again see what happens and where my hunger will lead me.

I also need to push myself to challenge ALL of my food and even exercise routines: rigidity is my ED’s thing, and it does not benefit my life, mind, or body.

All Posts by Month